The human visual system can perceive a broader range of luminance and colour gamut levels than what can be currently shown by state-of-the-art Standard Dynamic Range (SDR) displays. Having the possibility to display a wider dynamic range would provide audiences with an enhanced quality of experience when watching TV programmes. High Dynamic Range (HDR) imaging goes exactly in this direction and is one of the features envisaged for Ultra High Definition Television (UHDTV) where users will not only be provided with more pixels but also with better pixels. The dynamic range in one image is defined as the ratio between the whitest whites and the blackest blacks. As an example, printed images have a dynamic range of up to 100:1. The dynamic range is often measured in stops which is the base 2 logarithm of the ratio. SDR television monitors have a dynamic range of six stops whereas the human eye can see up to fourteen stops. HDR displays are starting to appear in the market and their cost could rapidly decrease when the deployments of HDR services become widespread.

Besides the developments required in capturing and display technologies, HDR necessitates the definition of new transfer characteristics curves to convey the light information associated with the recorded scene. The figure below shows a very high level block schema for a television signal chain.

The light radiance in the scene is captured by the camera’s optics and converted into electric tension in the CCD sensors. The conversion between light radiance to voltage levels is performed using an Opto-Electronic Transfer Function (OETF) which will provide the code words associated with each level. These code words are then organised in a file which is available for the subsequent processing steps such as artistic adjustment, compression, etc. At the display side, the received content is decompressed and the code words are converted back to voltage levels by the Electro-Optical Transfer Function (EOTF).

For HDR video the design of the OETF (and EOTF) curve is the key challenge from the signal processing perspective. For broadcasting, a practical OETF should have the following desired features:

The evaluation of best approaches to ultimately start HDR services is currently ongoing in different standardisation organisations such as ITU, ISO/IEC MPEG and DVB.

To meet the requirements of HDR services in broadcasting, ARIB standard STD-B67 and ITU-R BT.2100 specify the so-called Hybrid Log-Gamma (HLG) OETF. HLG uses a logarithmic curve in the highlights (since the quantisation noise is almost constant) and a gamma curve in the dark areas since the visibility threshold for quantisation is higher. Gamma curves have been widely used for SDR content: one example is constituted by the gamma curve specified by ITU recommendation BT.709. Thanks to the use of a gamma curve for a large part of the signal range, HLG signals provide backward compatibility with legacy displays. The shape of the HLG OETF is represented in below figure. 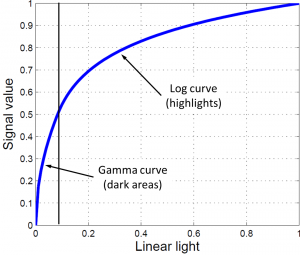 Transfer characteristics for the HLG

The HLG system specifies a scene-referred HDR signal which means that every pixel in the image represents the light intensity in the captured scene. Therefore, the transfer characteristics specified by HLG can be implemented directly in the camera and the signal produced by the camera is independent of the display. That means that there is no additional processing and no metadata are required to convert the signal for a particular screen. The absence of metadata is particularly advantageous in broadcasting networks since the synchronisation and metadata reliability problems are avoided. It also allows signals from different sources to easily be composited together on screen (e.g. at programme junction), which would be very difficult if each source carried different metadata.

Both the state-of-the-art High Efficiency Video Coding (H.265/HEVC) and the Advanced Video Coding (H.264/AVC) standards provide support to signal HLG and more importantly to serve both SDR and HDR receivers with a single stream. The support provided by the standards comprises two key elements:

The first element allows to signal that the decoded content refers to light captured according to the HLG OETF while the second enables SDR (legacy) receivers to still display a viewable pictures and, at the same time, HDR receivers to show the content in the full dynamic range. More precisely, when using the SEI based signalling, the transfer characteristics syntax element in the VUI is set to 14 which corresponds to the SDR BT.2020 OETF even if the content actually uses HLG. With this value in the VUI, a legacy receiver will be still able to apply the correct EOTF and, given the aforementioned backward compatibility feature of HLG, users are provided with viewable SDR pictures. By inserting in addition the alternative transfer characteristics SEI message, it is possible to specify that the actual transfer characteristics is HLG, so that HDR receivers can display the content accordingly.  The SEI message will be ignored by legacy SDR receivers.